Wrath of the Beast

Wrath of the Beast is a level of Tomb Raider - Angel of Darkness.

If Lara Croft steps on the Earth sign she enters the sublevel Wrath of the Beast.

In this level she will obtain the earth-gem. 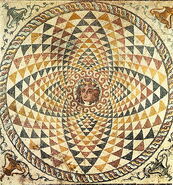 The mosaic in the beginning of the game (before the floor collapses) came from Corinth, Greece and is a Roman Mosaic dating from the 2nd century A.D. From here.

The star of David can be seen in the room. I believe it came from the ruined cathedral in Alet-les-Bains . It is - again - a reference to the south of France and the Catharic influence on the game. Ring a bell? See here for more information.

One of the more interesting features of the ruined cathedral in Alet-les-Bains is the fact that it has stained glass windows made in the form of the “Star of David” or Hexagram. (website)

More information about the star of David.

Because of its geometric symmetry, the hexagram has been a popular symbol in many cultures from earliest times. Anthropologists claim that the triangle pointing downward represents female sexuality, and the triangle pointing upward, male sexuality; thus, their combination symbolizes unity and harmony. In alchemy, the two triangles symbolize *"fire" and *"water"; together, they represent the reconciliation of opposites. Some medieval alchemists even borrowed the talmudic punish mayim, fiery water, and shamayim , heaven - to demonstrate the interpenetration of the two realms. 1 Because if this symbolism, the hexagram was even used occasionally as the emblem displayed above a brandy shop. (From here)

The decoration seen in the room came from the main gate of the church of St. Trophime in Arles.

I think it is a green man or Bacchus figure, it has grapes around his ears. The man has horns which may a reference to a demon or diabolic creature. I found a website where the original can be seen. It has it description: Bacchus, Melrose and Lake Shore Drive. 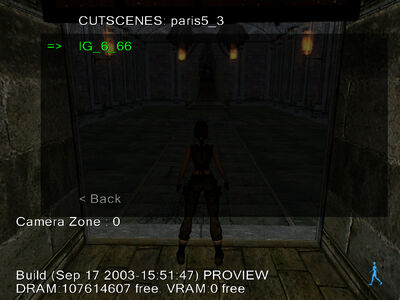 There is an animation in the game, it destroys the beast statue. It is called IG_666. Which is kind of funny because the number of the beast is 666.