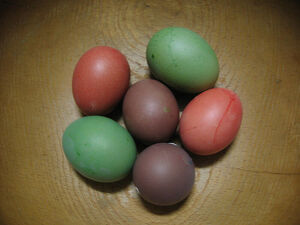 This page is dedicated to all the Tomb Raider 1 easter eggs.

So what is an easter egg? According to Wikipedia:

While the term Easter egg has been used to mean a hidden object for some time, in reference to an Easter egg hunt, it has come to be more commonly used to mean a message, image, or feature hidden in a video game, movie, or other, usually electronic, medium.

This page lists the easter eggs to all the eggs noticed in the game itself not related to any level and level specific eggs.

All things noticed in the game itself, not related to any level..

Gavin Rummary said that the level skip cheat code for the pc was based on the movie Wizard of Oz. Dorothy goes home by kicking her boots and spinning around. As mentioned on “The making of Tomb Raider. Tomb Raider 25th anniversary panel at Derby Quad” [1]

There is a weird audio track on the Tomb Raider I disc. When inserting the disc into a regular CD player, audio and music from the game can be heard. On Track 56, the audio track talks about 1999, a helicopter and a firestorm. It is an unused track of an early Core Design game called Thunderhawk 2 - Firestorm. As mentioned by Stereopatic on Tomb Raider Forums [2]

The handstand move of Lara has not a purpose in Tomb Raider I. Toby Gard putted in just for fun.

Sometimes he'd add new moves without telling his fellow developers. Gard added Lara's famous handstand move - more of an Easter egg than a useful ability - without telling the development team in the hope that they'd discover it for themselves. They did.

We were testing every day, then somebody went, ****, I didn't know that was in the game," Neil Boyd says. "Why didn't you tell us? Toby said, 'I wanted to see if you could come across it.' He would go that bit further to add something else in there, rather than just say, that's fine, then move on to the next animation."[3]

As you progress in the game, more stamps appear in Lara’s passport.

The Levels of Tomb Raider I[]

All easter eggs found in the levels of Tomb Raider I

In the intro FMV from Croft Manor showing a fish on a fountain. This fish came from a FMV from BLAM! Machinehead if you drowning into the waters. Peter Barnard did the FMV for both games for Core Design. [4] 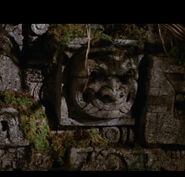 The picture from the city of Vilcabamba came from The Raiders of the Lost Ark. In the introduction Indiana Jones steals the Golden Idol, this artwork can be seen on the background (second picture).

The first unreachable medipack on a pillar. 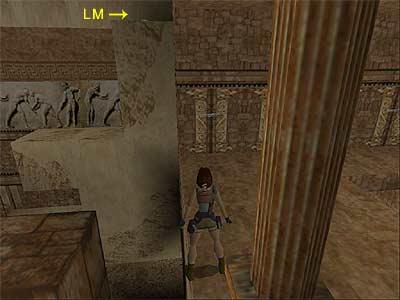 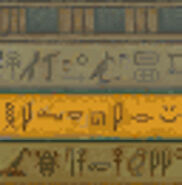 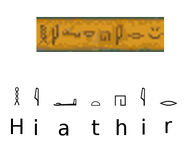 On the walls is a hidden message in hieroglyphics, the line ends with a smiley. The line with hieroglyphics above and beneath the middle line are bogus.

In the second picture can be seen that it spells H-I-A-T-H-I-R. If you replace the “I” for an “E” you get Heather. It is the first name of Heather Gibson one of the major level designers. She designed this level and most of the textures. Here is an interview with her.

Two large medipacks after a door that can't be openend.[6]

After bringing Natla down for the first time, she will raise her weapon when Lara gets close to her. At first I thought that it was a graphics glitch, but after reloading my last save game and shooting Natla again, I noticed that it indeed is an animation that plays when Lara stands next to Natla.[7]

The levels of Tomb Raider I gold[]

This is the additional Gold pack for Tomb Raider then only for the PC and MAC and ported to Playstation.

In the first unfinished business level “return to Egypt’ where you return to the City of Khamoon, the sphinx is sort of winking to you.[8] 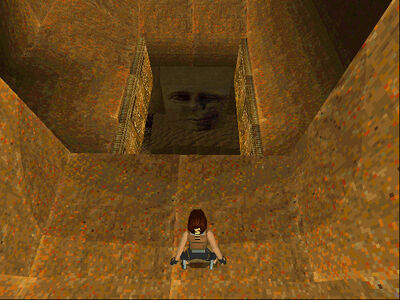 Temple of the Cat[]

In the level there is a wall with Lara Croft as an ancient Egyptian goddess. Not sure it is an easter egg, but it lovely. 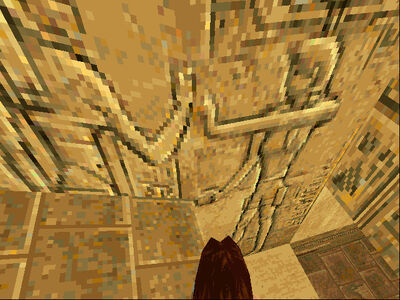