The cistern is inspired by sewers beneath Constantinople and other historic cities. In this level she needs to find a lot of keys to enter the exit. What makes things worst is Pierre shooting randomly at Lara. Yes, he's annoying (but you already know that).

It is called a Bucranium][1]. I found the original at the website from the British museum. [2]

Some info about what a Bucranium is:

Bucranium (plural bucrania; Latin, from Greek βουκράνιον, referring to the skull of an ox) was a form of carved decoration commonly used in Classical architecture. The name is generally considered to originate with the practice of displaying garlanded, sacrificial oxen, whose heads were displayed on the walls of temples, a practice dating back to the sophisticated Neolithic site of Çatalhöyük in eastern Anatolia, where cattle skulls were overlaid with white plaster. In ancient Rome, bucrania were frequently used as metopes between the triglyphs on the friezes of temples designed with the Doric order of architecture. They were also used in bas-relief or painted decor to adorn marble altars, often draped or decorated with garlands of fruit or flowers, many of which have survived. 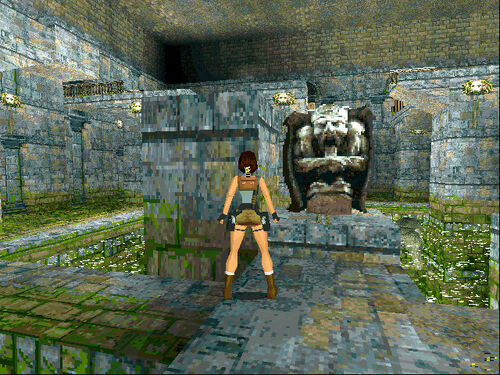 The demon statue are unknown to me. It looks ancient Roman. But I haven’t seen it before and could not find on the internet. The lion head statue is also unknown to me.