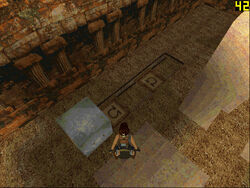 In a cutscene Lara enters the building of Natla. She discovers that the second part of the scion should be in St. Francis' Folly building and that Pierre is at this place. Lara Croft enters the building on the hill on an Island. The entrance is filled by cans with beans by the 'litterbug' Pierre. The building is filled with animals: tigers, bats, monkeys, fishes, and crocodiles. It has rooms to obtain a key to get to the next level.

It could be two meanings: 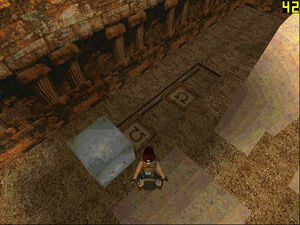 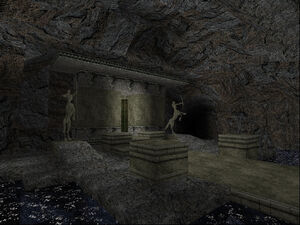 The centaurs in the tomb of Tihocan.

Lara is looking at a block that she pushed with two omega symbols.

Omega has several meanings: It is the last letter of the Greek alphabet. It is also called a horseshoe. That could be a reference to the end of the level where you going to fight the half man half horse guards (centaur). 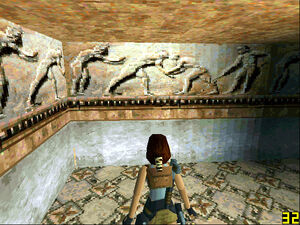 The original can be found here.

Funerary relief (510–500 BC) depicting wrestlers. Base of a funerary kouros found in Athens, built into the Themistokleian wall. Three sides are decorated in relief: wrestlers are on the front side, an unspecified athletic game (known as “Ball Players”) on the left side, a cat and dog fight scene on the right side.

It is reused in Tomb Raider - Angel of Darkness in the Louvre level. 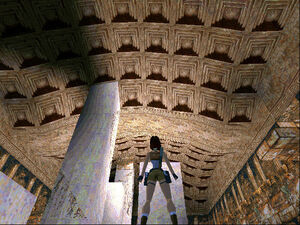 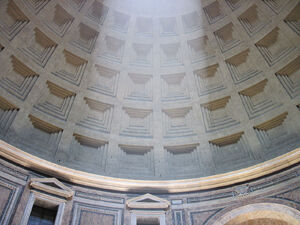 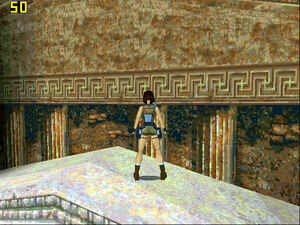 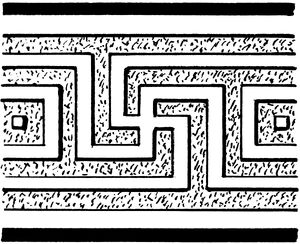 On the roof of the temple there are some Greek symbols. This is a popular Greek symbol and can be often found on Greek buildings. It represents the sun also called a Swastika.

Before you think.. ew.. “Swastika” it has something to do with the Nazi’s in Germany (1933-1945). You are wrong. The swastika is a very very ancient symbol used by many cultures around the world, from asia to america, from Europe to Africa. It represents to sun, luck, the north-pole and many more. 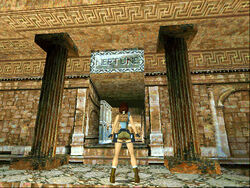 First of all Neptune is the god of the sea. A Roman god. His Greek equivalent is Poseidon. One of his symbols is the dolphin (see next picture). So this mini level has everything to do with water. 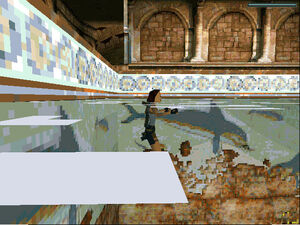 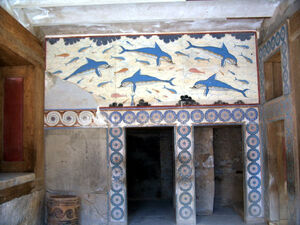 The dolphins can also be seen in the Midas level. The scenery comes from the Minoans. They ruled from 2700 - 1100 BC. They share trade with the ancient Egyptians, with Cyprus, Canaan, Levatine coast and Anatolia.

The picture came from knossos.[1], a large city dug up by Arthur Evans. In TRIV this image has been reused in the Library level. 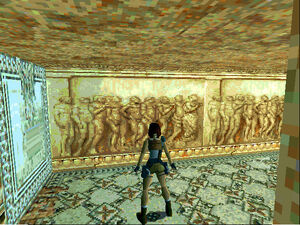 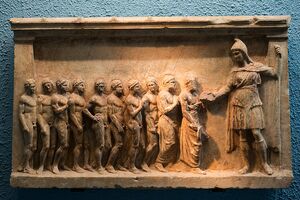 Found it on the website of wikimedia commons about the Collection of the British Museum. Found on the internet.[2]

This is a marble votive relief dedicated to the goddess Artemis Bendis. The cult of the Thracian goddess Bendis (similar to the Greek Artemis) was introduced to Athens around 430 BCE along with other foreign cults. Here, the goddess is shown on a larger scale than her mortal worshippers. She wears her distinctive Phrygian cap, short tunic, high boots, and an animal skin over her left shoulder. The men may be athletes who participated in the torch relay race in honour of the goddess. c. 400-375 BCE. From Piraeus, Athens. (The British Museum, London).. 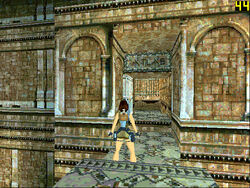 The Atlas room is very short and consist of a ball rolling down.. Atlas is a Greek god who holds the world on his shoulders. Thus: it would be the world that rolling down the slope. Sadly no interesting textures in this room. 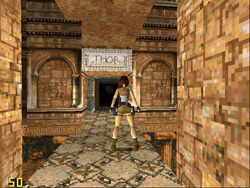 The Thor room was the only tricky room for me in the game. Thor is not an Greek deity but a Norse Deity of thunder and storm. His Greek equal would be Zeus but he throws lightning with his hands and Thor uses a hammer. 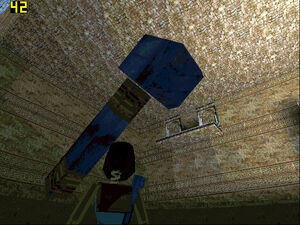 The hammer from the game 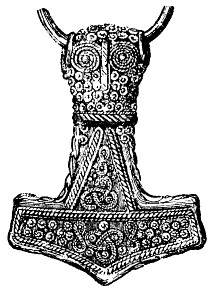 In the room there is a hammer. It is the hammer of Thor and called Mjölnir. [3] 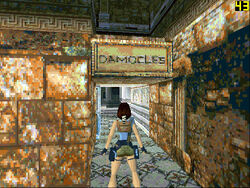 The first thing came to mind is the story of “The Sword of Damocles”, it reminds me of a saying in Dutch: “The Sword of Damocles is hanging from his/her head” which means in times for fortune there is a threatening and danger of life, uncontrollable and inevitable (I hope I translated it well).

Here you can read the full page about the sword of damocles. 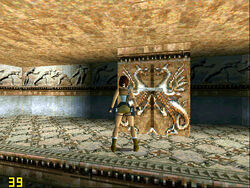 It looks like a supporter for a coat of arms. First I thought of a griffin or a basilisk, but it is a dragon, a winged snake. I couldn't find it on the internet. 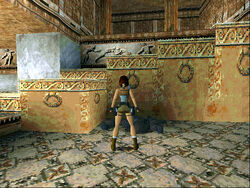 Couldn’t find it but it looks pretty. Overall the colours in TR1 are quite nice. 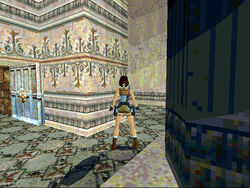 This motive can be seen on columns. First I thought it was Minoan art but it is classical Greek art.