Saint Aicard Church is a sublevel of the Parisian Ghetto levels. It is part of the game Tomb Raider - Angel of Darkness.

Saint Aicard Church is an abandoned church. Its new purpose is a boxing school. It is under the guarding eye of Anton Gris. Here you can bet on the watch of Anton Gris and pick up powerups.

Above the altar is a medieval inscription with god, angels and some saints on it. It's original can be found at the Saint-Génis-des-Fontaines Abbey in southern France called Église Saint-Michel. The thing is called a lintel and was made in the 11th century.

Which translates as: In the twenty-fourth year of the reign of King Robert, William, by the grace [of God] abbot, ordered this work to be made in honour of Saint Genesius the hermit, which is called Fontanes. 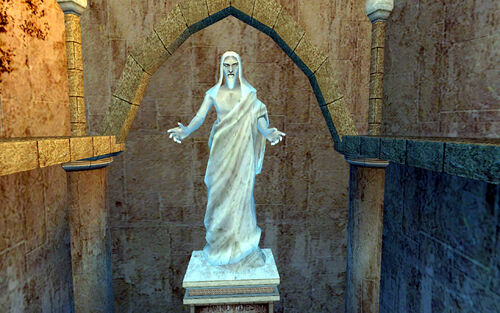 There is also a statue of a saint, presumably known as Saint Aicard. Didn't found the original.. 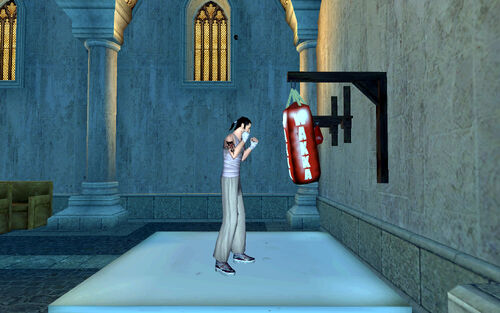 The boxer looks a bit like Steven Seagal. The WAKKA punshing bag, couldn't find it on the internet. Would be cool. 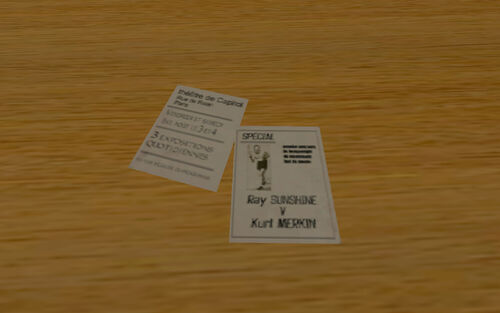 In front of the boxing ring on a table is a paper with an announcement. The text says: théatre de Capitol, Rue de Rohan, Paris. Vendredi et samedi, …. août le 3 et 4. 3 Expositions Quotidiennes.  Spécial, Ray Sunshine vs Kurt Merkin. This can be translated as: Théatre de Capital, Rue the Rohan, Paris. Friday’s and Saturday’s in august from 3 and 4. Daily three expositions. But I can be wrong.

The Ray Sunshine could that be a singer? I found an album from Ray sunshine: Blue Skies forever (1980). But Ray could also be Ray Tran a developer and “Sunshine” could refer to “The Sunshine Showdown”. I don’t know what is “Kurt Merkin” maybe it could refer to Kurtis. But what is Merkin?

The stained glasses on this page (05 till 10) came the Holy Roseary Chapel in Norwood, Ohio in the USA. Only six of the 15 are used in the game.

A bit messed and disordered considering this iconographic sequence must have a logical order - Joyful, Sorrowful and Glorious Mysteries - as it appears at the original chapel - here they just picked a few of them in no particular order, which will never happen in a real church- but still beautiful and shows the care of the developers to provide something real for the game textures. (Commentary from positivelyamazonian.tumblr.com.

Left; the picture from the game, right, it's original. This one is called "The Ascension".

Left; the picture from the game, right, it's original. This one is called "The Bird of Our Lord".

Left; the picture from the game, right, it's original. This one is called "The Crowning with Thorns". 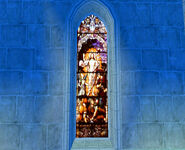 Left; the picture from the game, right, it's original. This one is called "The Resurrection". 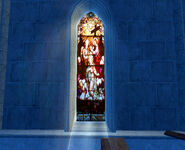 Left; the picture from the game, right, it's original. This one is called "The Coronation of Our Lady". 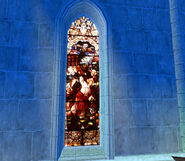 Left; the picture from the game, right, it's original. This one is called "Jesus Carries His Cross". 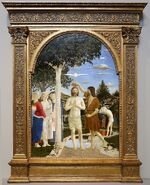 This is a fresco from Piero della Francesca, made in 1450. It is called: "Baptism of Christ". It’s current location is in the National Gallery in London, United Kingdom.

This is a fresco from Piero della Francesca, made in 1452-1458. It is called: "Death of Adam" and is part of a larger fresco in the church. The location is in the Basilica of San Francesco, Arezzo, Italy. 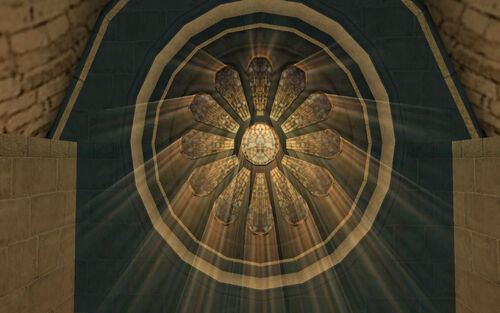 Notice the white dove in the center, that is the Holy Spirit.

Couldn't find it on the internet. If you have a suggestion leave a comment.

Some facts, some of my findings.

These picture are not used in the level. 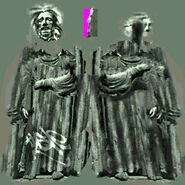 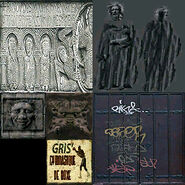 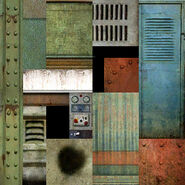 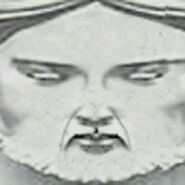 Most of the pictures came from outside the level. But it is hard to recognise what it would have been.

Posters with the names of the creators[]

This is a well known easter egg. These are the names of the creators in a boxing nicknames manner. See Easter Egg page for more information.

Lara could train her movements[]

In the sound files of Parisian Backstreets there is a mention of a punching bag. There is none in that level but in this level there is a WAKKA punching back to train on. So it must be here.

The name "Gris" is french for "Grey" in English.

Murty Schofield has many references to the "Greys" in his documentation.

If you think about it. “St. Aicard” seems like a strange name for a church or a saint. You don’t hear it often.. So what about it? This website refers to three people:

So.. Amiel Aicard seems interesting especial with the word Montségur. Ring a bell? No.. look at the level the Vault of Trophies. One of the Lux Veritatis names is Montesegur. Bogomil is the name of a priest and a religious movement in Bulgaria which lead to Catharism. Occitan is the name a part of south France which is associated with the Cathars. Limoux is a city in France.

Amiel Aicard stayed at Grotte de Lombrives. “The cave has served as a refuge for centuries: prehistoric Neolithic human groups, brigands, hermits, lepers, simple shepherds as well as counterfeiters took shelter there. The cave would have served as a refuge for Catholic bishop Amiel Aicard after the fall of the castle of Montsegur in 1244. It sheltered priests and nobles during the French Revolution and then Republicans during the First Empire.” From the French wikipedia.

In an interview with Murty Schofield he refers to the Cathars as well. See for the full interview at Tomb of Ash.

There are three places that have collision, but it is useless there.

1) Next to the boxer at the top of a punching bag.

3) At the top of a confession booth.