Lara is chased by the police in Paris after presumably having killed Werner von Croy, she has blood on her hands. Werner von Croy gave her the address of Madame Carvier, a friend of him. The main goal of this level is to get unseen from the police and go to a derelict apartment.

But this guide for art and not beta stuff. So continue..

In this section all the known references are displayed. 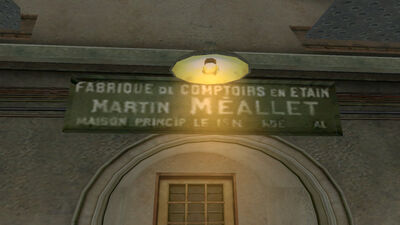 This could be a sign referencing two developers of the game: Martin Iveson and Sue Mallett.

The sign here translates as “Martin Meallet, manufacturer of pewter counters, established etc.” Maison princip translates as main/principal house, but there is actually a typo here, since ‘princip’ does not exist in French, whilst ‘principe’ does. There will be many typos like this to look out for throughout the course of the game; obviously, the Core team’s French was a little rusty…(from the KTEB; The Secrets from AoD) 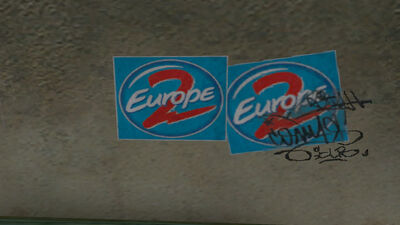 As for those Europe2 posters plastered in the alley, it’s a French network of FM radio stations dedicated to Rock and Pop music, relaunched in 2008 as Virgin Radio. They’re everywhere as well, which makes us think that students plastered them everywhere, much to the city council’s annoyance  (From the KTEB Secrets of AoD)

In the Russian version of the game it was changed to "Chocolade Shock", credit by Jorge Croft on Tomb Raider Forums. 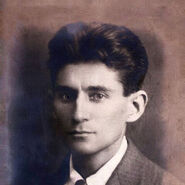 On the newspaper is a picture of Franz Kafka. The picture on the newspaper should be flipped. Which lead us to the Czech republic where the second part of the game will be taken, somehow a spoiler alert.

“This door is locked, I need a key” says Lara, looking at the door (and having no key). The door is an iron wrought door, but it is not. The developers of Core Design used the design of iron wrought balconies in Paris.

Wikimedia commons has listed a whole page of designs of iron wrought balconies. There are all sorts of designs. I discovered that on Rue de Richelieu has the same iron wrought designs.

Rue de Richelieu is a long street of Paris, starting in the south of the 1st arrondissement, ending in the 2nd arrondissement. For the first half of the nineteenth century, before Baron Hausmann redefined Paris with grand boulevards, it was one of the most fashionable streets of Paris 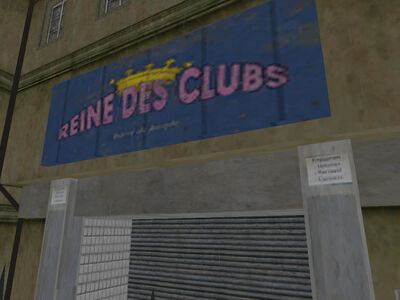 When Lara crawls near the policemen she sees a dance club Reine des Clubs.

Overlooking this park is also a shuttered club called Reine des Clubs, which translates as ‘Queen of Clubs’. Whilst the French word for club is actually trèfle, there are a number of clubs in France (well, a few in Metz and Montpellier, anyway) that actually have the name of the club in French, combined with the English word for ‘club’. In this sense, Core has really done their research—either that, or they just wanted to slip in a delicious pun. There’s even the image of a crown on the sign. (From the KTEB Secrets of AoD) 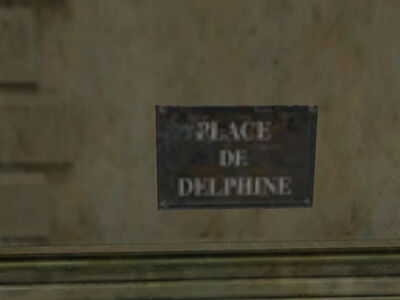 You see a sign: place de Delphine this links to novel “Delphine”, the first novel of Anne Louise Germaine de Staël-Holstein. In the Carvier level everything is Napoleon-themed.

The police car in the game.

Police car found on the internet.

The logo of the police car.

Core Design did their job very well in making the game realistic. The police car in the second picture is a Citroën. The logo of the Parisian police can be seen (it differs from the logo I posted here). It has a coat of arms on it of Paris (third picture).

The wooden bench in the game

The wooden bench in Paris.

The libary in the game

The libary in the cutscene

Notice the head on one of the books on the left window. It has an inscription: "RAY". This is a reference to one of the developers. Read more at the Tomb Raider 6 Easter Eggs.

The second image is a more detailed one. It can be found in a cutscene at the end of Galleries under Siege, it is called CS_6_21B. Lara has waken up by Bouchard he and his car driver drives them to the murder scene. 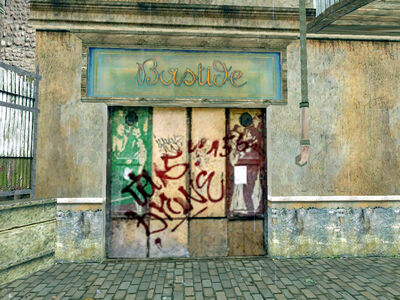 According to Secrets guide: Bastide translates as "cottage", which is perhaps meant to be an ironic joke given the shop’s current condition 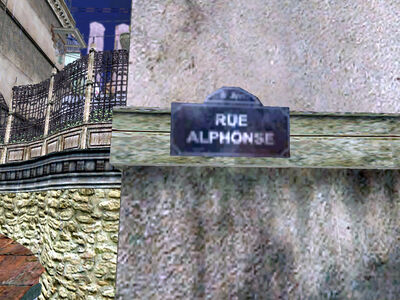 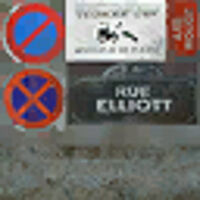 Rue Elliott street sign. It refers to Jonell Elliott, the voice of Lara Croft in Tomb Raider 4, Chronicles and AOD. The street signs were used in the more open beta version of the game. It has been scrapped.

In this section are all the images with unknown references are displayed. These contains words that are a mystery what it links to. If you known or recognize, please leave a reply :-) 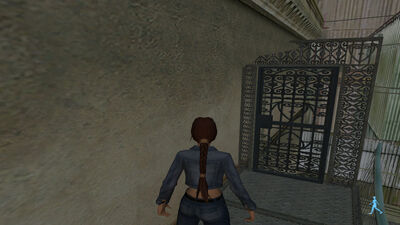 Most likely inspired on the iron wrought balconies in Paris. Source unknown. 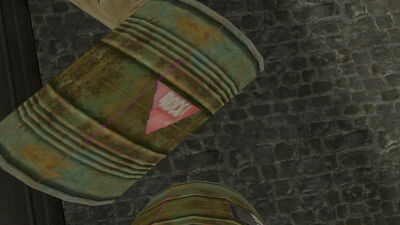 On the oil drum or barrel is text that could read either Rocki or Rocci or Rocel. 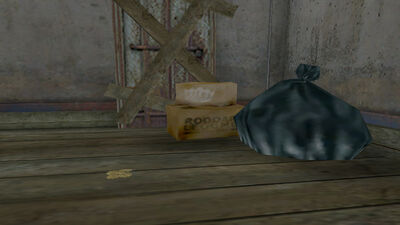 There are two boxes: 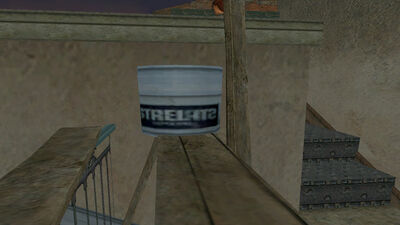 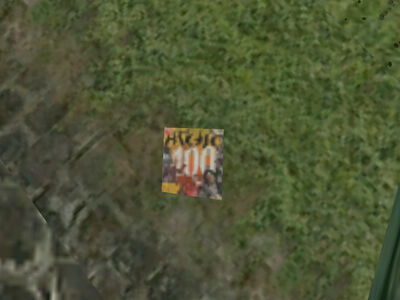 After gathering the key near the crow on the balcony, you have to unlock the door and crawl under a fence. In the garbage, there are some Japanese stuff. Maybe you can read it or not all I can see is “Hicho 100” or “Ichigo”. Japanese manga stuff, I think. 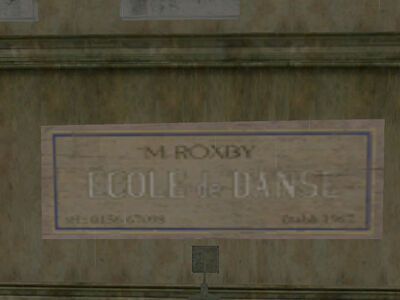 The dance school of M. Roxby. That name "Rox" or "Roxby" appears also in the Parisian Ghetto part 1 level as a store Delphine and Roxby and in the Margot Carvier's Apartment as a can of "Rox" in her kitchen.

According to wikipedia Roxby is a village in the Scarborough district of North Yorkshire, England. But I am not sure... 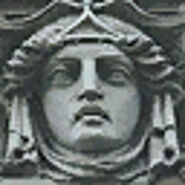 The head above the window is from a relief. It reminds me of the art nouveau imagery in the Prague levels.

On the streets there is a patrolling guard near the library. On the floor is some litter. Although it is small some things can be seen: a paper with TNT? And an art poster of some kind of movie. 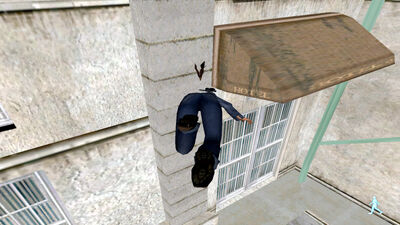 The same hotel can be found in Parisian Ghetto part 1. 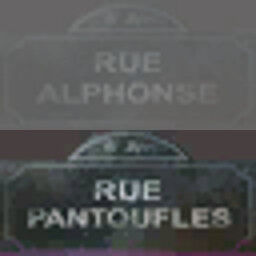 The Rue Pantoufles is not used in the game.It translate it as “Street slippers”. Thanx to Aurimas from Tomb Raider Forums. 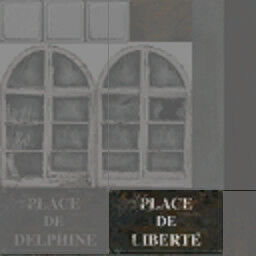 Place de Liberte; Which translates as “Place of the freedom” according to google translate. Also first seen by Aurimas.