Lara jumps into the obelisk of Khamoon level.

It is an armchair from Queen Hetepheres I, the wife of king Senefru and mother of king Khufu (a.k.a. Cheops). It has papyrus leaves on the side. It is now in the Caïro museum, Egypt. The chair comes from the 4th Dynasty (ca. 2600 BC).

The tomb of Queen Hetepheres I was discovered in 1925 by George Reisner. The tomb was hidden and complete by discovery. Some items can be seen here.

It’s the Senet game board from pharaoh Tutankhamun. In the hieroglyphics the complete five fold name of the king can be read. This piece was part of the treasure of the tomb of Tutankhamun (which also contains treasure of Akhenaton, Nefertiti and more). Discovered in 1922 by Howard Carter and Lord Carnavon. From the mid-18th dynasty (c. 1350-1323). Found here.

I don’t know the exact match. But it looks like the sarcophagus of

It’s a coffin of the Middle Kingdom in Ancient Egypt. The owner is called Irinimenpu and is located now in the Museum of Bologna. Found here. After long looking into the eyes of Horus I am convinced that this is it.

In hieroglyphics it says: Wesir (Osiris), neb-Djedu (lord of Djedu / Busiris), aa-netjer (the great god), lord of Abedu (Abydos) gives all the good things to the deceased.

The Eye of Horus is an amulet. It is also called a “Wedjat eye”. It is now in the collection of the British museum.  It has also a mythological background. 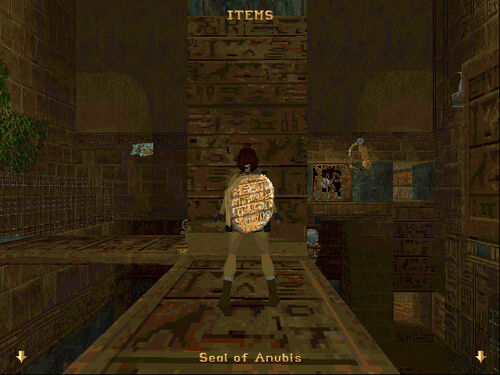 Don’t know what kind of this thing is. It could be the other side of a scarab. But it is too vague.

The Ankh symbol means life and is given by the gods to the kings, queens or other deceased people.

This one came from Nubia, the Napata Kingdom (700-500 BC). The Ankh symbol is now at the British Museum. In the Ankh it has 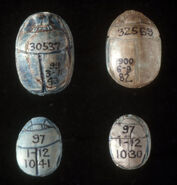 Could be any scarab. There are lots of them.

Scarabs were popular amulets and impression seals in Ancient Egypt. They survive in large numbers and, through their inscriptions and typology, they are an important source of information for archaeologists and historians of the ancient world. They also represent a significant body of ancient art.

From the middle Bronze Age, other ancient peoples of the Mediterranean and the Middle East imported scarabs from Egypt and also produced scarabs in Egyptian or local styles, especially in the Levant. (Source)