The Neptune's Hall is a sublevel of The Hall of Seasons in Tomb Raider Angel of Darkness.

If Lara steps on the water sign and chooses the right door she will arrive in this level.

Here she is attacked by a Lux Veritas knight with a flaming sword. If Lara is nearby the undead knight he will shoot fireballs to you. Lara must switch a lever and continue to a water level. Neptune is the Roman god of water and ocean. Via a series of corridors and spikes Lara will obtain the water amulet and get to the exit. 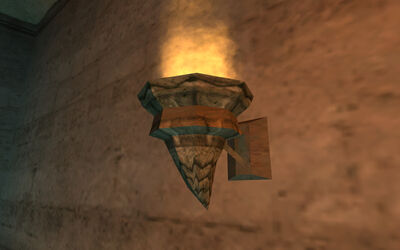 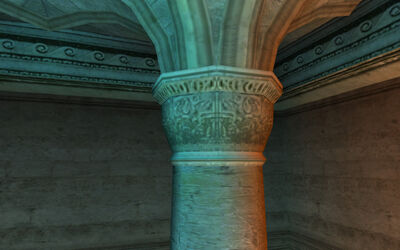 The column has a tiny cross on it. But it is difficult to get the original. 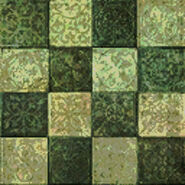 The checked floor has a certain glow on it, like it is moisturised with water. It can be compared with the rainy streets in Paris. On each check you'll see a pattern.

This mosaic can be found in the room under the gargoyle. It has a nice early Christian mosaic. But sadly, could not find it. Searched at “early christian art” or “mosaic art” or “Roman text mosaic cross”… 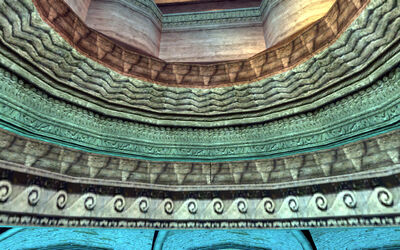 This image can be found in Fordington in Dorset museum. It is a Roman mosaic from England. 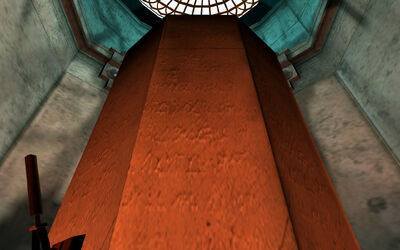 Some more unknown inscriptions (the image not very clear, but this is it) 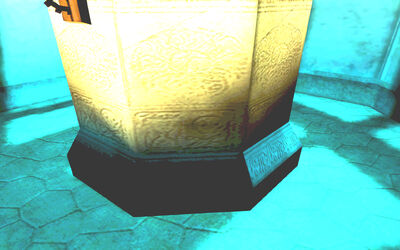 I see a hourglass and a skull, the image is not very clear, but this is it. The deeper meaning is explained here:

I think the skull & hourglass symbolizes mortality and is a reminder that we will all die in time. (site)

Some trivia some facts.

The round corridors reminds me of a nautilus shell or just a seashell. Maybe one of the attributes of Poseidon/Neptune.

The first image represents to top view of the level, the second the bottom view and the third one a nautilus shell. 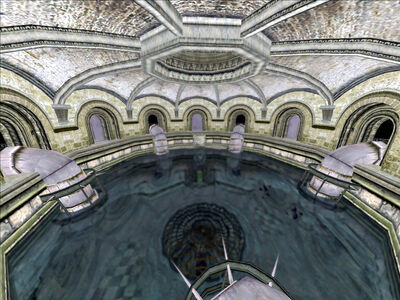 Beneath where you begin there is a hall with twelve doors. The same number as in the hall of seasons level (four symbols x 3 doors = 12). According to this video in the very beginning (E3 demo) the Hall of Seasons and this level was once connected.

According to Murti Schofield:

(From here) The number 12 is an important number, probably.. 12 months in a year, but I think it has more to do with alchemical stuff. When googling I found this page: The Magnum opus

The Great Work (Latin: Magnum opus) is an alchemical term for the process of working with the prima materia to create the philosopher’s stone. It has been used to describe personal and spiritual transmutation in the Hermetic tradition, attached to laboratory processes and chemical color changes, used as a model for the individuation process, and as a device in art and literature.

The original process philosophy has four stages:[1][2]: nigredo, the blackening or melanosis, albedo, the whitening or leucosis, citrinitas, the yellowing or xanthosis, rubedo, the reddening, purpling, or iosis

Alchemical authors sometimes elaborated on the three or four color model by enumerating a variety of chemical steps to be performed. Though these were often arranged in groups of seven or twelve stages, there is little consistency in the names of these processes, their number, their order, or their description.[5]

Various alchemical documents were directly or indirectly used to justify these stages. The Tabula Smaragdina is the oldest document[6] said to provide a “recipe”. Others include the Mutus Liber, the twelve keys of Basil Valentine, the emblems of Steffan Michelspacher, and the twelve gates of George Ripley.[7]

When looking into the Mutus Liber I saw this:

The Mutus Liber, or Mute Book (from Latin: Silent Book), is a Hermetic philosophical work published in La Rochelle in 1677. It ranks amongst the major books on alchemy in Early Modern literature, just as much as does Atalanta Fugiens by Michael Maier. It has been reprinted numerous times.

Maybe it is too far fetched but Brother Obscura is also a deaf person. 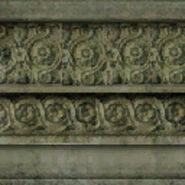 This looks like the decoration on the St. Trophime main portal. 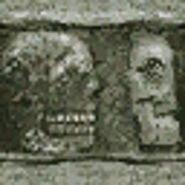