Lara enters the city of Vilcabamba, the second level from Tomb Raider 1.

Vilcabamba is an existing place in Peru. It is also known as Willkapampa or Espiritu Pampa. The city was founded by Manco Inca in 1539 that served as the capital of the Neo-Inca State, the last refuge of the Inca Empire until it fell to the Spaniards in 1572, signaling the end of Incaresistance to Spanish rule. The city was then destroyed, rediscovered in 1911, and scholars believe it to be the fabled “Lost city of the Incas”. (from here)

These statues can be found in the City of Tula and made by the Toltec culture (900–1168 CE). The statues depict Toltec warriors and also called Atlantean figures which to me came to connection to Atlantis you know the last levels in the game. A statue can also be seen in Tomb Raider II in the maze of Croft Manor.

It is one of the heads of the temple of Chavin de Huantar. From the Chavin culture (900 BCE to 200 BCE ) in Peru. Picture found here. 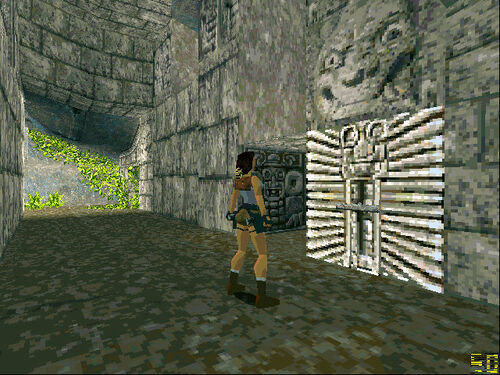 On the lever there is an unknown god. It could be a butterfly god. I really don't know what it is.

This one is different from the one earlier found. It is still a skull rack but I believe this is not Aztec but Mayan. I believe it is from Chicen Itza. Picture found here, more detailed picture can be found here. 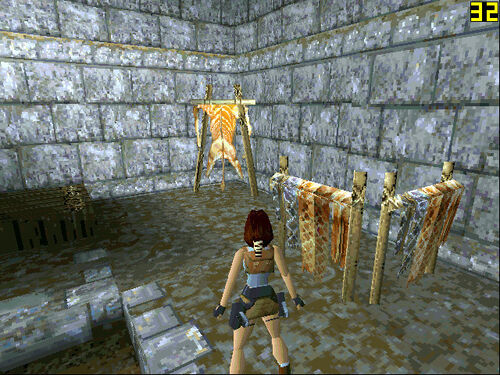 Someone leaves his or her stuff in a hurry. I love the atmosphere in Tomb Raider 1. It is just animals and a forgotten culture, no people around, just plain investigating.. It is quiet with creepy noices in my soundblaster :-) 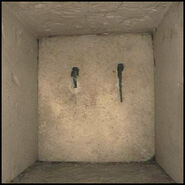 The block reminds me of the end of a shaft in the pyramid of the Great Pyramid or Pyramid of Cheops in Egypt. In 1993 there was a project called the Upuaut project where a robot would explore the shafts of the pyramid. The adventure ends when the robot couldn’t get further. In the camera there was a block with two handles. Upuaut project is named after a god from Abydos whose symbols where mixed up with Anubis (Inepu) and Osiris. Found here, worth a read.

Then the spirals on the background, this reminds me of the Governors palace in Uxmal. 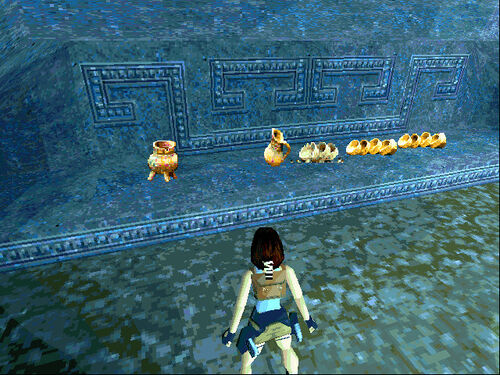 Left: a tripod vessel, and more. Not going to research these.

The golden idol is a (ritual) knife called a Tumi.

Tumis were employed for a diverse set of purposes such as kitchen knives, agricultural tools, warrior or hunting secondary weapons,

addition, the tumi form, in metal, was used as a type of coin. Pre-columbian Tumis were usually made of metal or stone. (From here)

I think this Tumi looks a bit like it as the “golden idol”. Exhibit in the Art Institute of Chicago, Chicago, Illinois, USA. 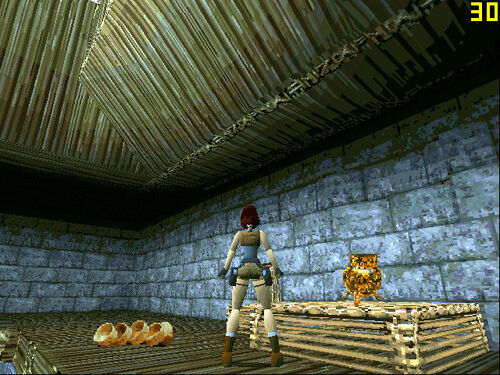 Nothing to say about these.

This is a reference to a beautiful piece now in the British Museum (as wel in other museums) of a double headed serpent. It’s from the Aztec culture, 15/16th century. It is possible that this sculpture may be one of the gifts given by the Aztec emperor, Moctezuma II, to Spanish conquistador Hernán Cortés when he invaded in 1519. 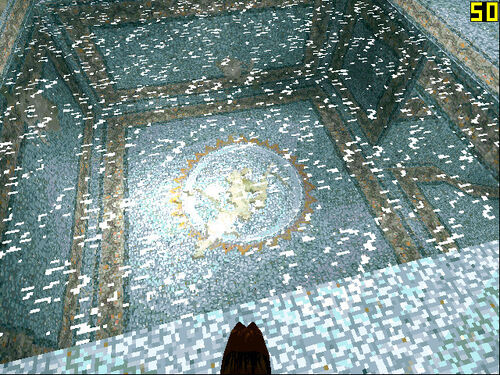 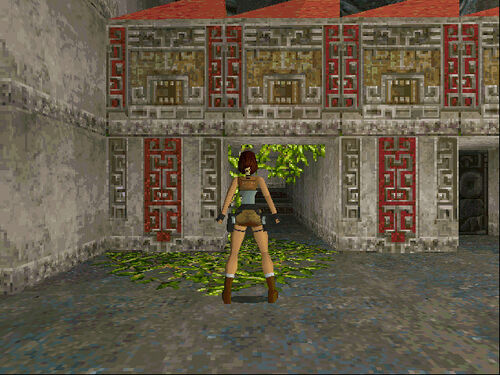 It is based on the ruins of Xpuhil, Campeche in Mexico. 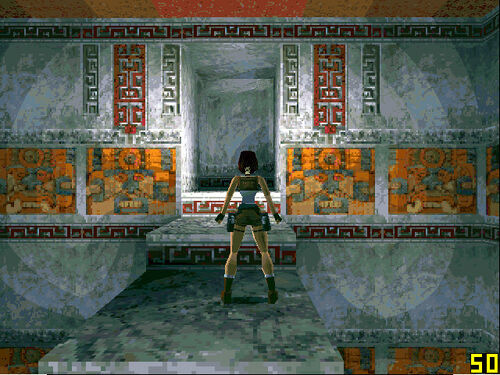 I couldn’t find these on the internet, looks like painted sculpture. I am sure they are Mayan or Aztec. The one with the jaws I think it’s Tlaloc, the rain god. The other one don't know. It looks very familiar.

Two faces from the Maya civilization. Maya face from Early Classic period (c. 250 - 600 AD) in the National Museum of Anthropology in Mexico. I think that the other face was edited.

This scenery of the Village of Vilcabamba level remembers everyone, I think. Reconstructive drawing of Structure I by Tatiana Proskouriakoff. It is based on the ruins of Xpuhil, Campeche in Mexico.