I think that the name of "Khamoon" is derived from “Tutankhamun”. We all know that the tomb of King Tut was discovered in 1922 by Howard Carter. So the “boy king” became famous. They put down the “Tutan” and keep the “Khamun” but turned into “Khamoon”.

And it has nothing to do with a moon. It is just because calling a game “City of Tut” is too obvious and so cheap…

The sphinxes in common was called “Shesep Ankh” or “Living image” by the Egyptians. And this Sphinx was identified with the god “Hor em Akhet” (Egyptian) or "Harmachis" (Greek) or "Horus of the Horizon" (translated). The myth with Thutmose IV and the great sphinx is fun to read.

The second thing is that the hieroglyphics are a bit tiny. But with a little imagination I can read the first part of a Horus name the pharaohs of the New Kingdom used. It is a falcon with a uraeus see below (Mortuary temple of Rameses III in Medinet Habu)

Oh the memories when I saw this.. Beautiful colored hieroglyphics. But I wondered why I could not read them. These are based on an image made by Henry William Beechy from a scenery in the Tomb of Seti I in the Kings Valley (KV17) discovered by Belzoni.

The first three small cartouches are fake. Then the big two cartouches (surrounded by blue): the first one is a real one and it stands for Seti-mer-en-ptah (Seti beloved by ptah) or just simply Seti I, the second one is fake. I’ll show you.

The cat is a representative of the goddess Bastet. It has a Eye of Horus and a winged scarab on her belly.

It is a remake of the Gayer-Anderson Cat statue now on the British museum named after major Gayer-Anderson. Egypt, Late Period, 600 BCE. More information here. 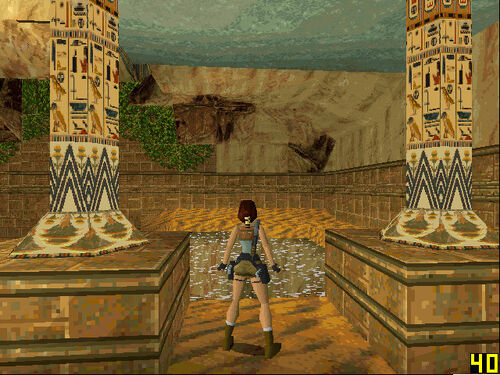 As you can recognize these hieroglyphics came from the painting of Henry William Beechy.

These colorful hieroglyphics came from a painting from Henry Williams Beechey as previously explained. These hieroglyphics make more sense. Some I can read:

pharaoh saw him as equal as a god, his son Rameses II depicted himself as a god in the Abu Simbel temple. And Amenhetep III saw himself as the dazzling sun god (the Aten) at the end of his reign. 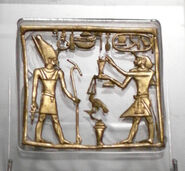 This is a golden plague of the Middle kingdom (2055-1650 BC) in the reign of Amenemhat IV. The good god Maä-Kheru-Re offers nice things to the god Atum of Iunu (Heliopolis). 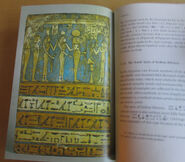 This one is kind of special. I could not find it on the internet, despite my tries. The scenery is from a tomb stela of Tashep-Khonsu, a female of the middle class in the Late Period.

It is now in the Egyptian Museum, Berlin. Accession number 932. I found it in the book Discovering Egyptian Hieroglyphs, A Practical Guide by Karl-Theodor Zauzich, published in 1992.

If I look closely, the two woman are Nephthys (Lady of the House) and Hathor (House of Horus).

This scenery came from an papyrus. It is called the the Book of the Dead from Hunefer, a few sheets of papyrus with drawings on it. It lies in the British Museums (inventory number EA 9901). Hunefer was a scribe during the 19th dynasty in the New Kingdom of Ancient Egypt.

Hunefer raises his arms to a college of gods. He will speak words as I didn’t do that or this. The gods are Ra (sun god), Atum (creator god), Shu (dry wind) and Tefnut (wet wind).

The book of the dead is a collection of papyrus of the New Kingdom. The dead one has to perform several spells to enter the Iaru fields. And of course the dead one reaches the fields in the afterlife and growing crops and be happy. Just like that. 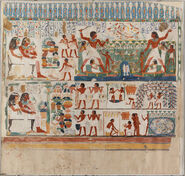 The scenery with the woman in the field of papyrus and the colour glass in Egyptian came from a scene of the Tomb of Nakht. The tomb lies in  Sheikh Abd el-Qurna and has the code TT52 (TT stands for Theban Tomb) and was build in the 18th dynasty.

It was copied by Norman de Garis Davies in 1915. The scene is now at the Metropolian Museum of Art in New York and it is called: Nakht and Family Fishing and Fowling.  Image came from here

Core Design altered the image and deleted the man who hunts with the stick. But the kept the Egyptian style colours. 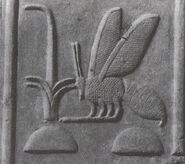 The bee is part of the title of kings: Nesut-Bity or “he of the sedge and bee”. The sedge (plant symbol) is symbol for Upper-Egypt and the bee symbol for Lower-Egypt. I am not  going to search for it because there are numerous depiction of a bee in hieroglyphs.

The picture for “bee” depicts bee but also honey. The Nile delta had a tradition for beekeeping. The center of this idea could be the Temple of Neith in Saïs. Her temple was also called: Castle of the bee” (source Maria Camela Betrò, ‘Hiërogliefen, de beeldtaal van het oude Egypte’, page 117)

The white sun disc and cow horns is the symbol of the goddess Hathor. Here is a depiction of her on a statue of Mycerinos (Menkaura) (4th dynasty).

That thing under the sun disc and cow horns is a coffin. It’s the coffin of Khnumhotep. There are three people with the name of Khnumhotep, I don’t know witch one it is. But it is currently in the Metropolian Museum of Art in New York. 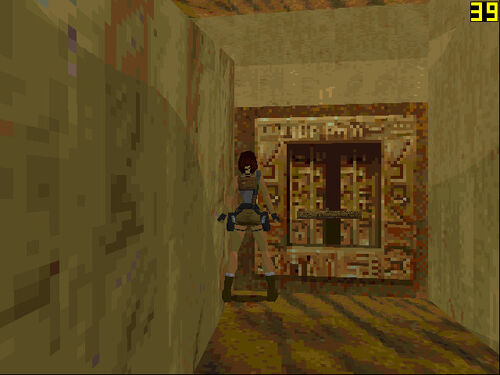 I think the lever was original a false door. I could not find the original. Some of the hieroglyphics can be recognized but it could be anything.. About the false door in ancient Egypt:

The Ancient Egyptians believed that the false door was a threshold between the worlds of the living and the dead and through which a deity or the spirit of the deceased could enter and exit.[1] The false door was usually the focus of a tomb’s offering chapel, where family members could place offerings for the deceased on a special offering slab placed in front of the door.[2] Most false doors are found on the west wall of a funerary chapel or offering chamber because the Ancient Egyptians associated the west with the land of the dead. In many mastabas, both husband and wife buried within have their own false door. 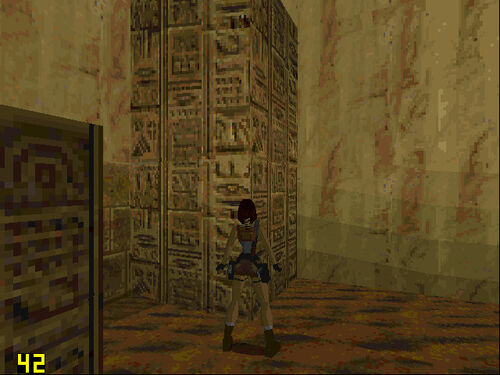 I think the blocks came from Abydos in Egypt. I cannot read all the hieroglyphics, which is sad. 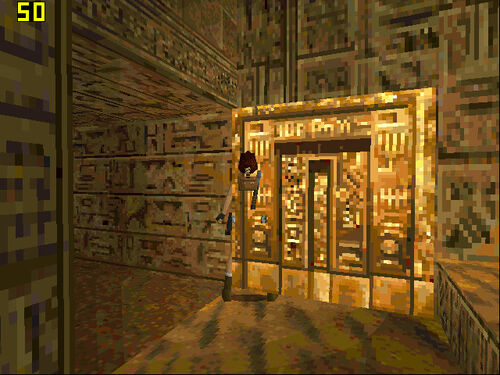 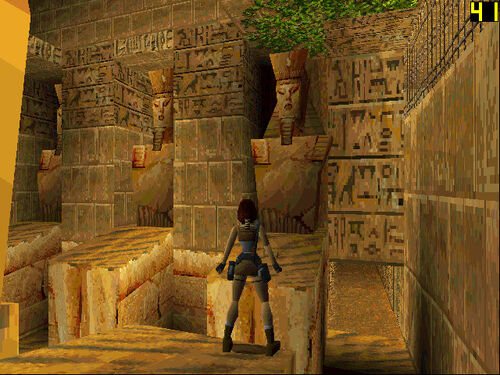 I think that the statues came from the British museum (room nr. 4) or from a book about ancient Egypt. The text right from the most right statue doesn’t ring me a bell. 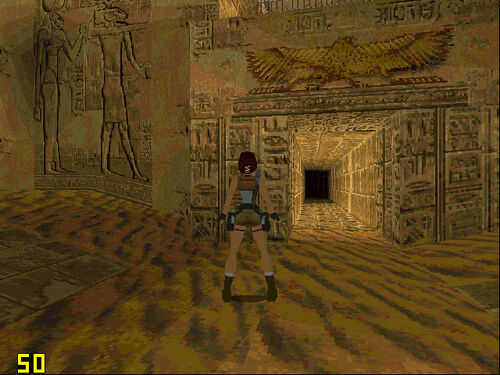 Couldn’t find it. I think of Abu Simbel temple or the Temple of Horus in Edfu.

The relief can be found on the walls of the Esna Temple. Esna was called Latopolis and was the domain of the gods Khnum, Menhit, Nebtu, Heka and Neith.

In this scene the pharaoh smites the traditional enemies of ancient Egypt to the gods: Khnum (rams head) and Menhit (lion head). A lion helps him to smite his enemies. 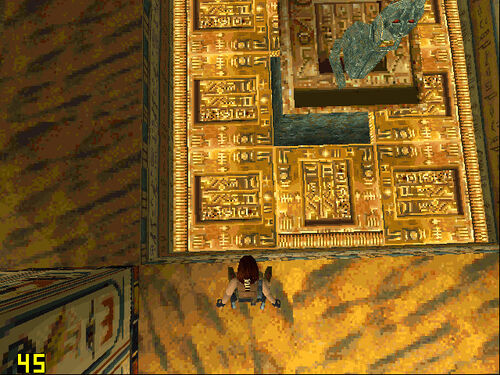